What the Shift by Eva Gordon

What the shift? How does one becomes a werewolf.

Here are a few ways on how werewolves are made:

Curse: An ill-fated man could become victim of witchcraft or fall under curse of evil spirits. The person then would involuntary turn into werewolf. Logan, in The Stone of the Tenth Realm was cursed this way.

Bitten by Werewolf: Another common believe was that any one could become one if saliva of a werewolf could find a way to bloodstream; might be from bite or scratch. This is the most common myth in Hollywood and always fun. Reminds me of rabies.

Putting on Wolf Skin: An evil-minded person could put on hide of a dead wolf and become a werewolf. In case the complete skin was unavailable, a belt or girdle of wolf hide would supplement it. Historical.

Occult or Devil Worshiping: A wicked person can start worshiping the Devil and surrender his soul to it. The Devil then would grant him the power to become a werewolf. In some cases it could be any evil spirit answering to devotion.

Magic Salve or Ointment: A good number of recorded cases mentions a potent salve or ointment with which werewolf would rub their bodies for transformations. The compositions of those ointments were different, but generally contained plant ingredients like nightshade. Pig fat, turpentine and olive oil were used as solvent for them. Later when the distillation of spirits was perfected, alcohol served the purpose.Wine makes me howl at the moon.

Genetic : Except for my fantasy novel (Logan is cursed) all my werewolves are born that way.

In my Alpha Wolf’s Pet and spinnoff  series Team Greywolf (coming soon to a book store near you) my werewolves are born wolf and live as wolves for three years until they are bitten by the human alpha and through Stallo’s ancient curse and ancestral memory become man, but still with the ability to shift.

Find out more. Read each story individually or in the box set. Starting Sunday (December 6) Book 2 and Book 3 will be on Countdown Sale. All three books are on Kindle Unlimited as well. 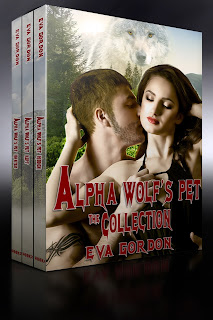 Coming in January 2016 Slade, Book 1 in the Team Greywolf Series. Sign up for my Newsletter to stay posted on ARCs and New Releases.